Dumb and dumber Wiki
Register
Don't have an account?
Sign In
Advertisement
in: Heroes, Roomates, Neighbors,
and 22 more

Harry Dunne is a former dog groomer/breeder from Providence. He is the deuteragonist of the 1994 film Dumb and Dumber, as well as the mid-1990s cartoon Dumb and Dumber: The Animated Series, the 2003 prequel Dumb and Dumberer: When Harry Met Lloyd and the 2014 sequel, Dumb and Dumber To along with Lloyd Christmas.

Harry Dunne was born to a loving mother in 1970. He met Lloyd in high school in the year 1986. Sadly, his parents had passed away and was adopted by a sweet Chinese family. He had a dog named Biscuit, who would lick peanut butter from his genitals (as seen in Dumb and Dumber To.) In 1994, he accompanied his best friend and roommate Lloyd Christmas on a cross-country trip to Aspen to deliver a briefcase to Mary Swanson. Twenty years later, he and Lloyd would travel on the road again in search of his potential long-lost daughter.

Harold Avery "Harry" Dunne is an incredibly nebbishy, oafish, giggly, cute, danger-prone, ignorant, infantile, bubbly, ditsy, and naive gentleman. He is a best friend to the doubly immature Lloyd Christmas. However, at his core, he is sweet towards others, and has a loving, sweet, kind, gracious, free, and gentle spirit. In the second film, his skinnier frame transforms into a rather pudgier one. However, the change of his appearance does not hide his charisma and beauty.

On some things, he is a tad smarter and more logically minded than Lloyd. Not only is he more literate, (as shown in the first film), he is quite aware that it would be inappropriate (maybe even illegal) for Lloyd to date, never mind to marry, a woman 20 years his junior (as shown in the second.)

Harry is also a breathtakingly alluring and handsome man, and it shows, as he charms Beth Jordan, (a woman who worked with the FBI, posing as a desperate lady running from her boyfriend), and even Mary Swanson, (much to Lloyd's chagrin, of course!) He and his friend also allure several swimsuit models on the Hawaiian Tropics Bus (as demonstrated at the end of the first film.)

It has been revealed that Harry had not intended for himself and Mary to get together, but later, as he, Mary, and Lloyd were held hostage by Andre, Harry considered that moment as revenge, as his then-main squeeze, Fraida Felcher, told him that Lloyd was the one she had been seeing all along.

Brave even, Harry will sacrifice his own life to save those of his friends! (Shows you how much more guts Harry has got than his best friend does!) To illustrate this, after Harry had come to (after being shot by the sinister Andre), he saves (or tries to save, anyway) Lloyd and Mary by shooting back at him. Unfortunately, he misses! (But no worries; Beth Jordan saves the two men, the woman, and the day!) Also, when poor little Penny was about to be shot by the vicious Adele, sweet Harry had sacrificed his life to save Penny's, much to hers and Lloyd's horror.

Furthermore, the vacuous and airheaded Harry (in his own way) can be as terribly guileful as Lloyd. For instance, as Harry had taken Lloyd from the mental institute, he said he needed a new kidney from his closest relative. Since his adoptive parents (rationally) couldn't give him one, his real parents were dead, and he couldn't get one from Penny, as the heartbroken Harry had found out that he wasn't Penny's father, Lloyd had taken one from his own body and gave it to Harry. This practical joke had served the immature Lloyd right after having wasted Harry's life (as well as his own!) After being shot by Adele, Harry was rushed to the hospital with Lloyd, Penny, and Fraida in tow.

Harry and Lloyd in a hot tub

Harry and Lloyd having lunch with Joe

Harry and Lloyd after going shopping

Harry and Lloyd crying over a commercial

Harry and Lloyd having a haircut

I was just shaving!

Harry talking to Lloyd on the phone, thinking it's Penny 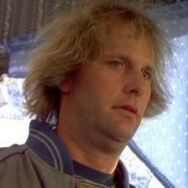 Harry and Lloyd as they appear in the animated show.

Harry's daydream about being a father to a young Penny
Community content is available under CC-BY-SA unless otherwise noted.
Advertisement